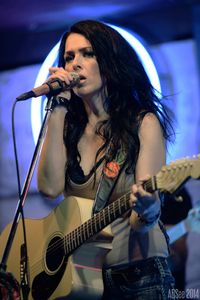 Miranda Rose is a rising star and Hot A/C singer/songwriter. Her powerful vocals incorporate country, rock and soul, drawing comparisons to other warm voiced superstars like Sheryl Crow, Kelly Clarkson, Carrie Underwood and Joss Stone. With personal, positive lyrics, her writing calls to mind artists such as Jewel, Taylor Swift, Shania Twain and Amy Lee. Sometimes soulful, sometimes sultry, always independent and unafraid to speak the truth; Miranda is a true pop country star shining light on the best elements from today’s music and blending them into her own unique sound.

Her self-titled debut album was recorded at the legendary Village Recording Studio in North Hollywood California. "Miranda Rose" contains the breakout single "All In" which garnered a nomination as “Adult Contemporary”, "Song of the Year” in the "17th Annual Los Angeles Music Awards" (the largest and longest running Hollywood red carpet event for Independent Artists in the world!) and also "Portrait of Life" the duet, with singer/songwriter, actor “Scott Grimes” of television’s “ER”, and voice of Steve Smith on the popular animated sitcom American Dad.

Miranda Rose recently put the finishing touches on her, yet to be titled, second Album. This album explores the edgier, more danceable side of Miranda’s multi-faceted musical personality. This album includes, sure to be hit singles, such as “You Don’t Get to say”, “Remember When”, and “Heart Shaped Garden”.

This Album has garnered Miranda Rose multiple nominations in The 18th Los Angeles Music Awards in the category of, Female Singer Songwriter of the Year, and won her the title of "Orange County Artist of the Year!" in the Producers Choice category.

Born and raised in Southern California, Miranda Rose grew up just outside Los Angeles and also lived near the beach in Orange County. (Made popular by: Television shows such as “The O.C” and MTV's “Laguna Beach” and “The Real Housewives of Orange County”.)

Recently relocating to Austin Texas, otherwise know as “The Live Music Capital of the World” Miranda Rose is working with top notch musicians and producers on her next project; while gigging and planning the official launch of her Debut Album “All In”. Her journey was recently filmed for HGTV's popular show House Hunters. (Check the Media page for more details)

Be sure to "Download the CD", Learn the songs so you can sing along, Sign up for the monthly news letter so you know what's happening, and Check the calendar for local shows and Miranda Rose tour dates. We hope to see you on the road! Until then, Shine On....And Remember to….

To be a positive influence and source of inspiration to this; and future generations.